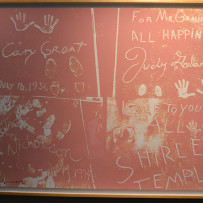 Produced from a photograph taken by Andy Warhol, this screenprint shows a section of the entryway outside what was Grauman’s Chinese Theatre (now called Mann’s Chinese Theatre) in Hollywood, California. From the early 1960s, silkscreen printing was central to Warhol’s work and the basis for his paintings. He regularly manipulated his images, using color to expressive effect, making a feature of decorative surfaces or harsh contrasts. In works made prior to around 1975, Warhol primarily used images from the media in his prints, drawing attention to the impact media makes on contemporary cultural values. Many of his later portraits were made from photographs taken by him. This print was part of a portfolio, Eight by Eight to Celebrate the Temporary Contemporary. The work was published in an edition of two hundred and fifty, and this is #115/250.  Measures 29″ X 42″ signed & numbered in lower left hand corner.  Excellent original condition.