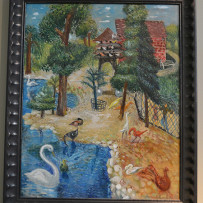 Aaron Bohrod (1907- 1992) was an American artist who studied at the Art Institute of Chicago and the Art Students League of New York between 1926 and 1930. Bohrod was influenced by John Sloan and chose themes that involved his own surroundings. He returned to Chicago in 1930 where he painted views of the city and its working class. This bird sanctuary on a lake may have been in the Chicago area during that time. Oil on Masonite signed in lower right corner Aaron Bohrod 32. Measures 20″ x 16″.