The Intrigue of Coin Hoards 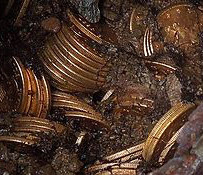 There are times throughout history when a collection of coins is found that electrifies the imaginations of both the general public and the most ardent collectors alike. These large finds are referred to as hoards, a name that implies the coins were hidden away and eventually lost to the world and their owners. The Saddle Ridge Coin Hoard is the name given to the collection of 1,427 gold coins found buried in a rust covered metal can in the Gold Country of California in 2013. The coins were found by a couple while walking their dog on a trail on their property. In total, the hoard contains $27,460 in face value of $20 gold coins, $500 in face value of $10 gold coins, and (4) $5 gold coins, all dating from 1847-1894. It is believed to be the largest known discovery of buried gold coins ever recovered in the United States, and has been assessed a value of $10 million. There has been much speculation as to the origin of the hoard since its discovery, including the involvement of such legends of the American west as Jesse James and Black Bart. It joins the ranks of other famous coin hoards including:

Some of the these coins continue to become more and more valuable, and others have seen their value decline since their discovery due to greater availability or population. The undeniable benefit of the discovery of virtually every hoard that has been well publicized, is the general public’s increased interest in the world of numismatics. The history and intrigue that these coin finds conjure up, are the very reasons many collectors became interested in coins in the first place. Their history and evolution are tied to the most important and defining events of our great nation.