Home » Antiques & Collectibles » History of the Morgan Silver Dollar (The most collected Silver coin in the world).

History of the Morgan Silver Dollar (The most collected Silver coin in the world). 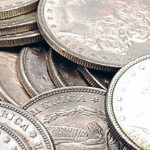 The Morgan silver dollar was produced by the U.S. Mint from 1878-1921. It is composed of 90% silver & 10% copper, and contains just over 3/4oz (.77) of pure silver. The name “Morgan” is derived from the designer/engraver of the original design, George T. Morgan, who was actually not an American but an Englishman. The coin depicts the profile portrait of “Lady Liberty” on the obverse, and a Bald Eagle with wings spread clutching three arrows in one talon and an olive branch in the other. The discovery of huge amounts of silver in the American west (e.g. The Comstock Lode) paved the way for the passage of the Bland-Allison Act which required the U.S. Treasury to buy a certain amount of silver and create legal tender silver dollars. Initially the coin was struck only at the Philadelphia mint, followed soon after by the San Francisco and Carson City mints. In 1879 the New Orleans mint also began producing the coin in order to fulfill the high quota required by the Bland-Allison Act. The Denver mint, established in 1906, only struck the coin for one year in 1921. The minting of Morgan dollars continued at a steady pace until the passage of the Sherman Silver Purchase Act in 1890, which required the U.S. Treasury to purchase an additional 4.5 million ounces of silver bullion per month. The over-supply of silver, along with the Panic of 1893, eventually caused a dramatic drop in the price of silver, which led the U.S. Mint to halt production temporarily of the Morgan silver dollar in 1895, and to close the New Orleans mint.  The Sherman Silver Purchase Act was repealed, and the remaining silver bullion stores were used to mint Morgan silver dollars until it was exhausted in 1904, and production was halted. The Morgan silver dollar would not be minted again until 1921, for only one year, and from an entirely new master die.  The passage of the Pittman Act in 1918 authorized the U.S. to melt over 270 million silver dollars, in order to replenish the silver bullion stores of England and other U.S. allies. The act also authorized the replacement of the melted silver  dollar with new coins, which led to the single year of 1921 Morgan silver dollars having very high mintage totals from each of the three remaining mints in production.